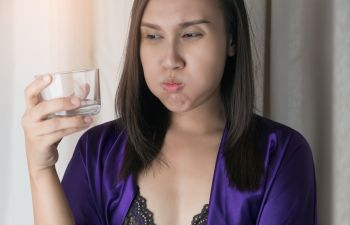 Did you know that you swallow 900 times or more every day? Most of the time, you do it unconsciously because your body automatically makes it happen.

Swallowing is supposed to be effortless. Dysphagia is the term used to explain when it is not. It is the feeling of food or liquid being lodged in the chest or regurgitated, or throat discoordination leading to choking or coughing during swallowing.

All swallowing disorders are a form of dysphagia. The most common causes of dysphagia include neurological disorders (like multiple sclerosis, Parkinson’s disease or stroke), cancer, tumors, brain injuries and certain medications.

Swallowing is a seemingly simple reflex. However, it requires complicated synchronization between the brain, nerves and throat muscles. In addition, it involves several components: the pharynx, upper and lower esophageal sphincters and the esophagus. A swallowing disorder may result if this system is compromised in any way.

Adding to the complexity, the esophagus (the tube connecting your throat to your stomach) is vulnerable to injury. Esophageal muscle damage could hinder the lower esophageal sphincter from relaxing, potentially causing achalasia, an uncommon swallowing disorder. Achalasia causes dysphagia with solid and liquid foods.

Achalasia affects the esophageal muscles and nerves and the lower esophageal sphincter, a muscular ring that regulates the esophagus’s lower half. As a result, those with achalasia have difficulty passing food and liquid into their stomachs.

Sometimes, people quit eating food to avoid chest pain, resulting in weight loss and malnutrition. Unfortunately, achalasia could be misdiagnosed because its symptoms resemble digestive disorders. Therefore, you must seek a specialist to diagnose achalasia.

POEM is a minimally invasive endoscopic treatment for swallowing disorders, particularly achalasia. First, an endoscope is used to see within the esophagus, which appears on a nearby monitor. Then, the surgeon makes several small incisions near the lower esophageal sphincter to loosen tightened muscles and restore esophagus-stomach function.

POEM involves no external incisions (the endoscope is introduced through the mouth), reducing complications and pain. In addition, the minimally invasive endoscope speeds up your recuperation time.

Contact Dr. Shouhed to Reduce or Eliminate Your Swallowing Difficulties

If you have achalasia and want to learn more about POEM, visit Dr. Danny Shouhed in Los Angeles. Your initial consultation is an informal, relaxed meeting focused on answering all your questions and informing you about endoscopic procedures and their benefits.